Autism Acceptance: We All Grow Up


We want April -- Autism Acceptance Month -- to matter, to help further acceptance and understanding of autistic experiences, happiness, and rights for autistic people of all ages and abilities. We will be publishing your Autism Acceptance posts and pictures all month long. If you want to participate, contact us at thinkingautism at gmail dot com. -TPGA Editors


I heard a crunchy sound from a mouth that should have been empty. It is a horrible feeling when I think one of my children has eaten something dangerous. We've been pretty lucky around here, the most inedible items actually swallowed aren't really inedible, the cut-off tops to strawberries, nibbles of wine corks, a little raw onion, a small piece of crayon; nothing really harmful at all.

So when I heard the crunchy, chomping-on-china-plates sound, I begged Jack to spit out what was in his mouth. He laughed as I followed him around the kitchen, and tried desperately to put my finger in the side of his mouth. Just as I was wondering how much worse it was going to be when he bit off and swallowed my finger along with the glassy sounding bit, he pushed a small white object out between his lips at me, and it bounced between my fingers and clinked like porcelain onto the floor. He smiled and ran across to the living room. 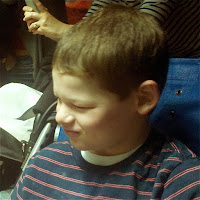 It was a tooth. His tooth, of course. He's still a kid who is going to lose teeth. All at once he is both too young and too old for that, but he's 11 1/2, so he is actually right on time to lose those molars. And whether I am ready or not, many milestones occur without regard for ability or disability. He grows physically, and changes mentally by the minute these days.

He's just at that point between being a little boy and a young man. In some ways, he'll always be my baby, just like I am my Daddy's "Jennyalice, " and Momma's "BabyGirl," but I need to remember that he is growing up. It's challenging sometimes to gauge things because his known abilities are so uneven and his expressive communication requires a patience on my part that I strive for rather than come by naturally. But even if Jack is not at grade level in math, it doesn't mean that he might not have crushes on girls, or start to have other new interests. We've already recognized that he is attentive to Myth Busters, and done with Dora.

I'm trying to stop using the word "potty," and use instead, "bathroom" or "toilet." I hold myself back a little bit when he is in front of his classmates before I smother him with kisses. When the topic of moving from one classroom setting to another came up at his school, I asked him what he thought, and what classroom he thought he should be in.

As a society we often infantalize people with disabilities, especially those people who do not speak typically. People who use AAC devices aren't always given credit for all of the nuance of thinking they may have because their device 'speaks' in straightforward, quipped language. And those who do not use devices at all are often thought to have no thought at all. In the absence of a clear, articulated sentence, it is still important, or rather, imperative,  to consider Jack's opinion first in any situation that involves him, and to be respectful to ensure that, as much as possible, barring safety concerns, Jack be in charge of his body and his actions.

It would be easier to push and pull him where I want, maybe. It would be faster if I made the choices: vanilla or chocolate, green or red, apple or pear. It would be convenient to use only my desires to dictate where we go and what we do next. I'm guessing this is just part of the parenting process in some ways, when our children are young we control most of their environment, and some of that control naturally falls away with a typical child who asserts themselves with voice or physical action. With a kid like mine sometimes you have to look carefully for the cues that tell you to step aside. The longer I have this job, the more I realize that it is my goal as a parent to teach my children to make good choices on their own, and to support them so they are confident in the decisions they have made.

And as they grow older, I will encourage both of my children to give thought to what they want out of this life.  As individuals they need to consider what is the best thing for themselves, for their family, and for their community with any choice they make. It may always be harder for me to tease out what Jack thinks is important, and to discover his desires, and I recognize that he may need help executing many of his choices.. but he deserves to be heard.

When all of those little baby teeth are gone there will be a precious, possibly-pimply, fuzzy, young man standing in my kitchen, and we should all want to know what he thinks.


A version of this essay was previously published at jennyalice.com.