MMS: Yes, It Is Bleach


When we wrote previously about the use of MMS, a bleach compound, administered orally or as enemas on the promise that it would “cure” autistic people, we received many, many comments in support (or defense) of using MMS. Many people exhorted us to 'do our research,' to not 'jump to conclusions.' One of the most recent comments went as follows:

"Your 'argument' falls down immediately. It is not bleach -- the chemical structure is completely different. This is where unbiased researchers like me stop reading -- you can't even get the chemistry part correct so why bother. If you can't be bothered to research your subject then please don't write about it, it really is that simple."

Weary of this kind of assertion and the ad hominems that always seem to accompany the defensiveness, I offered to this particular commenter the following suggestion:

"Why don't you pour some on a black t-shirt and see what happens?"

After writing that, I bethought myself: Why not pour MMS on something dark and see what happens?

So, I did. Yes, Dear Reader, I ordered MMS -- I paid money for this stuff: 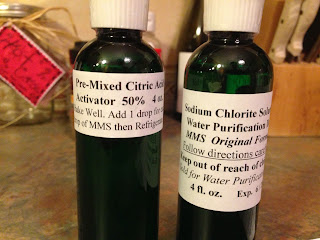 ...and then I did the following:

1. I read the instructions, which include a warning to "keep this out of reach of children." I'd suggest also keeping it outside of children.

2. I followed the instructions, mixing the two provided solutions, the MMS and the activator, 1:1. I ended up mixing in 10 drops of each. Then, lacking an appropriate black t-shirt, I got a navy blue cloth napkin: 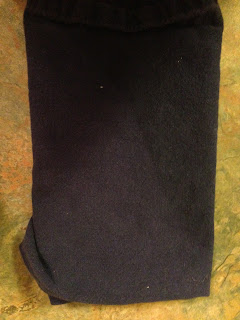 3. I added some drops of MMS to the navy blue cloth napkin in a specific spot.

4. I added the same number of drops of the "activator" to another, separate spot.

5. Then I added drops of the mixture, mixed as directed onto a third spot on the napkin. [NB: I did not add "2-4 oz of water or juice" as this was simply to determine the bleaching properties of the compounds.] By the way, once I completed this process, it took hours for the bleach smell to dissipate, and it lingered in my olfactory passageways for hours.

These additions are the top, middle, and bottom spots, respectively, on the image below:

6. Then, I waited and took pictures at various intervals.

Experiment completed. Data analyzed. Conclusion? MMS alone bleached the hell out of that napkin. The mixture also discolored it. Together, MMS and its "activator" operated as ... a bleach.

Now I get to say: This is your child's gastrointestinal tract:

This is your child's gastrointestinal tract on MMS, an "intervention" that AutismOne saw fit to feature at its most recent conference and that it still features on its Website: 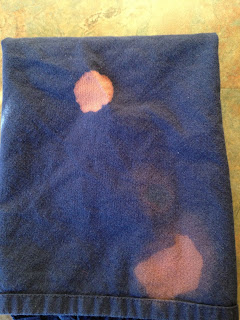