Spread the Word to End the Word

This week hundreds of thousands will stand up and ask our family, friends, and coworkers to Spread The Word To End The Word.

This means I am asking you to stop using the words “retard” and “retarded” because when you do, even if you’re joking, even if you don’t mean it as a slur, even if you’re talking about yourself what you are doing is disrespecting people with intellectual disabilities... people like my sons, Sam and Noah. 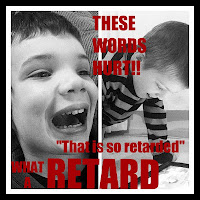 Would you call my sons retards? Would you say that the ways they stim or perseverate on things is retarded?

Of course you wouldn’t, but I have heard it said to them by kids on the playground who think the way Sam jumps up and down and flaps his hands looks strange, or because Noah likes to make loud screeching noises and run in circles.

So I want to ask you...where did these five- to ten- year-olds learn this word and more importantly who taught them that it means someone who is stupid and slow witted?

They heard it from adults, from teenagers, from their peers who heard it from their dad complaining about the way the football player botched a play or from their teenage sister who called him a “tard” for tripping over a table leg. Heck, they hear it on TV, they read it in books, and they grow up thinking it’s no big deal to call something someone does “retarded.”

But it is a big deal.

It is a very big deal to my family, to my friends raising children with special needs, to those who work and care for those with intellectual disabilities, and to people with disabilities. It is not “just a word” it is a slur and is hateful and disrespectful even if you don’t mean it to be.

Also, this word is not about being politically correct. It’s about being compassionate and respectful to those around you. It’s about thinking before you speak and weighing how your words effect others.

I think this video from the R-word campaign says it best:

If I hear you use the r-word, whether it be online or in person, I WILL ask you to stop and I will explain to you why it is offensive to so many. Raising children with special needs has taught me that you have to stand for something in this world or you will fall for anything. I owe it to Sam and Noah to demand respect for all persons regardless of their abilities and I hope you will join me.

You can help by making a public pledge to stop using the r-word by visiting http://www.r-word.org and by sharing this blog post or those written by others about the subject via your Facebook and Twitter accounts.
Posted by Jen Myers on Thursday, March 08, 2012
Email ThisBlogThis!Share to TwitterShare to FacebookShare to Pinterest
Labels: acceptance, activism, disability rights, R-word, Special Needs, Sunday Stillwell
Spread the Word to End the Word
2012-03-08T03:30:00-08:00
Jen Myers
acceptance|activism|disability rights|R-word|Special Needs|Sunday Stillwell|
Newer Post Older Post Home
View mobile version
Subscribe to: Post Comments (Atom)
Follow TPGA on Facebook & Twitter
for daily autism news, resources, & discussions