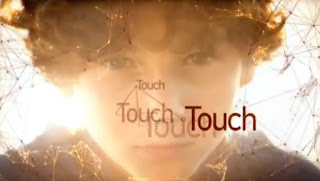 Fox TV's new Kiefer Sutherland series Touch premieres in two days, on Wednesday January 25th. We're intrigued, and watchful. The series revolves around a non-verbal child, Jake, who understands numerical patterns other people can't perceive -- and his father Martin's attempts to understand not only what Jake is trying to communicate, but Jake himself.

From the series description at Fox.com:


Blending science, spirituality and emotion, the series will follow seemingly unrelated people all over the world whose lives affect each other in ways seen and unseen, known and unknown. At the story’s center is MARTIN BOHM (Kiefer Sutherland), a widower and single father, haunted by an inability to connect to his emotionally challenged 11-year-old son, JAKE (David Mazouz). Caring, intelligent and thoughtful, Martin has tried everything to reach his son. But Jake never speaks, shows little emotion, and never allows himself to be touched by anyone, including Martin. Jake is obsessed with numbers—writing long strings of them in his ever-present notebooks—and with discarded cell phones.

Some folks are already skeptical. Alyssa Rosenberg at ThinkProgress is critical of series co-creator Kring for "inventing a magical alternative to autism," and Ellen Seidman at Parents.com says:


I like it in concept because it’s a TV program about a kid with special needs, which isn’t very common (understatement alert). I don’t like it concept because I’m concerned it’s going to take the focus away from the amazing reality of our kids—something many people still don’t get. And, count on it, some people are going to think kids with autism actually can do this, feeding into the stereotype of savant abilities.

Matt Web Mitovitch of TV line reports that series star Sutherland believes Touch will highlight the potential of those with autism, and the need for the rest of society to try to better understand autistics:


“The Danny Glover [professor] character is interesting,” says Sutherland. “He believes that we have misdiagnosed a group of people that actually are at a much more advanced form of communication, but because we don’t understand it we’ve diagnosed them with what we can best understand.”

That exploration of what autism is and could be was born of the fact that [series co-creator] Kring has a son who lives with the condition; as such, he’s taking care to see that Touch‘s fictional aspects are founded in scientific fact.

Autism is no longer mentioned on Fox's official Touch site, but Fox secured an autism and special education expert, Joanne Lara, as technical consultant on the pilot. Joanne also advised on the role of Jake, the eleven-year-old protagonist. We spoke with Joanne last week; here's the part of our conversation that centered on the series' special needs themes.

In developing the character of Jake, did the writers or actors consult with people who have autism themselves, like Stephen Shore, or any of the autistics you know?

No. The head writer knows his way around this territory, that's all I'll say. It's very close to him. He doesn't need to confer with Stephen.

My role was more about "are we doing this right?" It wasn't as if the writers said, "Well, what do you think we should do now, Joanne?" They wrote it, then presented it and said, "Look, does all of this line up correctly? Is this the way a social worker would come to a house or an apartment in New York?"

It was also a technical advisor role; I'd be the one who did due diligence in talking with a social worker in New York, making sure they were wearing the right badge, or asking them how they dealt with runaways -- did the supervisor come in? That's important because each state is different in the way the deal with these matters. Those aren't necessarily the kind of questions that Stephen Shore could answer -- you need someone like myself who's going to spend half a day tracking down someone and asking, "If you find a kid like Jake at the top of a cell phone tower in New York somewhere, how is everyone going to respond?"

I gave him a marble, based on my background in method acting, where it's all about an article -- because it would be a realistic piece of property, something he would actually hold. If he didn't have a disability, he would keep it in his pocket, and the moment he touched it, that's when the physicality would come in, in terms of "this is how I walk when I hold this marble." That's really method acting. So it worked for him as the character, and as an actor.

Is it true the creators didn't want this to be a "doom and gloom" presentation of autism? That instead this kid Jake has special skills, and it takes patience and understanding -- an understanding of the potential of his abilities -- to save the world?

Exactly -- using what we know, and what the head writer knows, as a template for a do-gooder little guy with super powers. He could be an action figure hero! But he's only eleven, and he doesn't talk. It's quite brilliant, I think. It's really something. I'm pinching myself that I got to be involved -- I was called and told only that it was a pilot -- but then it turned out to be Kiefer Sutherland and all these people. I was so pleased that they chose me!

Does the show talk at all about why he has autism, or is it presented straight -- this is a kid who needs support, and his father is figuring out how best to support him?

It's a given that he already a disability. They don't say the word "autism." They did at first, when I was on the set -- but I heard they reshot and re-edited that scene, so I'm not sure how they're going to reveal that -- all we know is that he has a disability, and that he's a savant with numbers.

It's not like Parenthood, where the first line is "Oh, he has Asperger's! What are we going to do?" It's not like that at all. It's more like "there are some problems here, let's figure them out, let's figure out why he would climb up to the top of a cell phone tower! Let's figure out why everything he does has to do with numbers!" And I've known real numbers kids, I've worked with them -- sort of like the [coincidentally named] autistic savant boy Jake recently interviewed on CBS -- I'd like to see how they're doing now with their numbers, and how that played out.

At TPGA, we try to help people understand that autism can be OK, it's a different way of being -- and we also want to give them role models, show autistic people who don't just play a role in neurotypical characters' journeys of self-discovery. It sounds like Jake is a fully-fleshed out character in his own right, who carries as much weight as anyone else?

Oh yes, David's the star. He and Kiefer are the stars. And you're right, in Parenthood it's the other, the parents are discovering themselves through their child -- that's not what happening here. The child is the one climbing up the tree, and we're the ones who are throwing the rocks and bringing him down.

So it sounds like he's the one in control -- and the problem is that everyone else needs to catch up with him, and understand him?

That could be applied to autism in general!

Well, like I said, the head writer really knows his way around this territory. I think that's not by accident. I think that's the way he planned it, that's what he wants. And there is where the interest is going to lie, not only for individuals and families and people who work in the field, but also the general public is going to go "Wow, I know someone who has a child with autism, but I always thought it was something different…"  That's an important message for everyone -- for the world!

So it's showing that autism is not just Max in Parenthood, it's not just Gary in Alphas, it's not just Rain Man -- there are kids like Jake who are non-verbal but incredibly intelligent -- so this could really add to the neurodiversity tapestry.

And not to mention the individuals themselves who are non-verbal and are watching it. Hopefully they'll see this and think, "Finally, someone's talking about me!"

We'd like to know what Autistics, families and friends, and professionals think of the show. You can comment about the preview below -- and if you watch the pilot, come on back and let us know what you thought of that, too.