Today's press conference was incredibly rewarding -- and had an information density not generally found in nature. Any errors or omissions in the skin-of-my-teeth transcript below are mine entirely. -SR 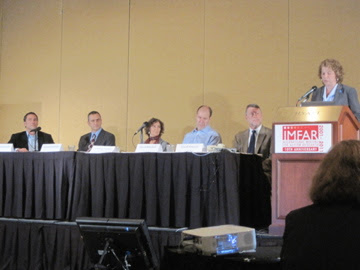 MIND Institute, INSAR president (INSAR is the host of IMFAR).

Autism is an incredibly complex, wide range disorder that affects 1% of children. List of co-morbid disorders is long and debilitating. Still little certainty as to what causes autism, which is why research is critical.

INSAR is aware of the public's interest in everything autism, and decided two year ago to establish a public relations committee to communicate with the press, and the public.

The science we'll be highlighting now is just a conference highlight. We'll be touching on a variety of topics: genetics, neuroscience: connectivity, imaging, chemical pathways etc. Also a variety of studies on environmental factors, and the impact on family life of having a child.

Not every study has gone through peer review, but idea is to communicate passion and ideas in the field.

What are the connections behind autism? We know that the first warning signs are language, communications. Frontal cortex networks, fibers, are very slow to mature, and convey important information for highest functions: social understanding, language and communication. No studies have looked at these large bundles that extend from one portion of the brain to another.

We studied 84 toddlers with confirmed ASD and followed them longitudinally. 54 typical kids as well.

MMIL at UCSD was used, neuroimaging facility, mapping tracts within the brain.

Remarkable and striking differences and age related changes in these tracts/areas of the brain: in some, but not at all in others. One area connects frontal and temporal tracts, which interconnect, and allow complex functions in frontal cortex to take place. Another affects language and communication functions. Another affects ability to decode semantic meeting - pragmatics. Another area connects with the limbic system, including amygdala. Another area connects left and right sides of frontal cortex to decode social meeting.

In some areas, 1 - 2 year olds with autism have a premature acceleration, overdevelopment of their fiber growth in areas that underly key areas of autism, but when they hit age 3/4 have slowed growth in those same areas. The overabundance of connection in the fiber tracts, which might mean those tracts are having problems differentiating, lead to dysfunctional connectivity and interfering with further development and specialization -- leading to decline in function/autism.

Implication: the sooner a child's autism is identified, and the earlier a child receives treatment -- learning may guide further development of these axons.

N-Acetylcysteine (NAC): it's an over the counter medication used currently by autism families -- does any scientific evidence justify its use?

NAC is a glutamatergic modulator, and an antioxidant.

NAC was able to decrease disruptive behaviors and irritability compared to placebo (based on sample of 29 kids).

Very preliminary trial, need large study to confirm validity. So not a recommendation.

Papers are not yet peer reviewed, but indicate avenues for further research.

Focused on factors that are modifiable, possible risk and intervention avenues.

1) Prenatal influenza/fever and risk of autism: Maternally reported fever during pregnancy associated with over twofold higher risk of ASD in the child.

Strongest risk was for 1st and 2nd trimester fever.

Maternally-mediated inflammation might be part of mechanistic pathway leading to autism. Some parallels in animal studies as well. Factor appears to be the maternal response to the infection rather than the microbe.

If the mother has at least one of these condition during pregnancy, 60% increased risk for autism, 150% for developmental delay.

Further evidence that a metabolic disruption or inflammatory pathways may be a prenatal autism factor.

Elevated in non-elective C-sections, but when adjusted for underlying indications, was no longer the case. Meaning: although risk for ASD is increased, may not be the surgery itself -- underlying reasons for C-section (pre-eclampsia, breech, placental insufficiency, etc.) may be the factor.

Most of the attention on the cost is focused on the direct cost: Education, and health care. 24 States have passed autism insurance mandates since 2008, which insurance companies are fighting.

Other half of story: indirect costs to families: Out of pocket, yes, but also changes to the family.

Medical expenditures panel survey was used; asks parents about their children's health and health care, as well as parents' employment.

How does this affect family income? A large reduction, 27% or $17K.

Was adjusted for age, education, ethnicity, US region, and family income.

Is raising a kid with autism more challenging or disruptive? We hope to look at that in further studies.

2) Inclusion and educational placement. When segregated, social opportunities for peer modeling are limited. Strong pockets of social ability may languish due to focus on treating deficits associated with autism.

In the classroom, teacher felt they could use more resources, especially aides. The teachers themselves felt prepared. But felt the kids came to the classrooms unprepared to be included in a general education class.

So, teachers are putting the burden for inclusion on the child, rather than prepping as well as they could themselves.

So for intervention for increasing inclusion, need to clarify, put onus on teachers for creating good fit for that child, working with that child in that setting so the child will be ready to learn.

IHP
Every little study adds to larger body of science that draws upon different studies. Each brings different, convergent evidence of etiology of autism and ways we can intervene. We are very much in early stages of understanding autism. Autism science was set back 20 years, first by refrigerator mother beliefs, so we are farther behind in understanding than we could be.

Not relevant to vaccine question because autism is a mulit-factorial disorder. Multifactorial within each child! We can't preclude post-natal factors as well.

DA
Lots of work will be presented on brain development and function, in IMFAR: have confirmed this precocious brain growth. Our twist is that in our 200 child cohort, most associated with kids with regressive form of autism -- the interesting thing is that when we look at head circumference, started at 4 - 6 months of life. So behavioral regression took place at 18 months, brain changes took place at 4 - 6 months.

Nature magazine
What is the hypothesis of how neuron overgrowth leads to autism?

EC
There is no evidence that speaks one way or the other to the underlying cause of early brain overgrowth. There is no developmental neuropathology of autism. In the absence of firm knowledge, this disorder will remain a mystery for a long time. Suggested that is due to overgrowth of neurons, meaning that it's a prenatal event.

Autistic child begins life with between 50 to 100% more neurons than typical child. Paring down those neurons and axons to number needed for typical function is a big task. We need more hard core biology research to study this, too few people are looking into this. We need more labs, more intense work.

IHP
Myth that everything that has to do with autism has increased over last few decades. Part of increase has been to better diagnosis, DSM definition changes. We know that there were undiagnosed cases in past.

Simons Foundation
Curious about your opinions on Korea prevalence study. Would we get similar results in US?

IHP
Missing study details did not allow me to evaluate methodologies, so can't comment.