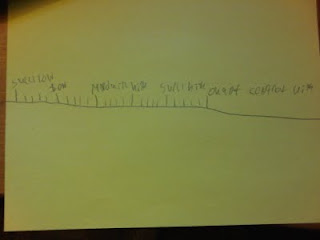 TH and I were walking today. We walk together a lot, and by "together," I mean that he is linked to me like my barnacle, hooked to my arm with his arm, adding about 30 extra pounds of downward pull to whichever of my sides he's on. In fact, I have him switch sides so that I don't end up listing permanently, like the Leaning Tower of Pisa, from all the weight.

Today, we were on just such a walk when somehow -- gee, can't imagine how -- we got on the subject of autism. The context was the difference in ability to use speech among autistic people. TH is aware that he is unlike some other autistic people in that he can talk. A lot. Sometimes with much sense and sudden insight, and other times with what seems like very little of either. He's also aware that he flaps and makes a lot of nonsense noise and grimaces, and we were talking about how everyone with autism can seem so different even if they share little bits and pieces of some of these things, and that's when he said it.

"I think that people who can talk really well and don't flap and don't have a lot of things like that but still have autism are being very 'low autism.'"

He explained that he meant just what he said, that they are showing a low level of autism. Continuing, he elaborated his own linear version of the spectrum, in which there is a medium autism and a high autism, and the features of each. High, to him, meant difficulty with talking and a lot of flapping and grimacing and noises. These are his terms, by the way, not mine.

"And you can be in different places on that scale," he said. "When I'm really calm and can talk, I'm on the low-autism end. But when I'm really excited and need to flap and make my noises and faces, I'm more at the medium-autism part." In other words, some days are more autism-y than others. Not less function or more function, just more or less autism.

Furthermore, his scale has no "zero." I know this because he drew it for me when we got home (see image). Its lowest setting is "super low autism." The highest appears to be "out of control with" and lacks increments entirely, a reflection, I think, of how he feels at times like that.

I'd say that this day, given that he was able to articulate all of this, was a low-autism day for him. Although when I suggested that I film him while he explained his idea, it kind of turned into more of a medium-autism day. Autism can be that way, you know?

Thus, my nine-year-old autistic son helped me today, solving a mystery I've puzzled over about why on some occasions, I can say, "Are you ready to do math?" and he'll sit right down and do 10 problems, while other times, he'll only respond, "Eeeeeeeeeeeee!" Now, I've got a lexicon to turn to -- and possibly turn on him -- when we're having one of those "Eeeeeeeee!" sorts of days.

Autism operates on a sliding scale, according to my autistic son, and not as a measure of function--because you know what? To TH, the function is always there. It's just that sometimes, intense emotions, intensely felt, like excitement or that ever-present anxiety can scale up the autism even to "out of control with." What matters to him is the autism scale, not the function scale, and I found his perspective unique -- just like his autism.