All images copyright Luna The Moon Girl, used with permission. 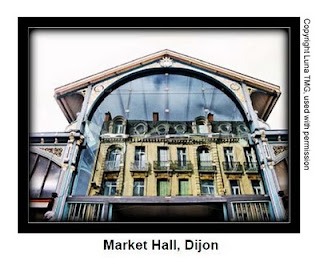 The photographs of an emerging French photographer depict her fascination with reflections, a feature of her autism.

The photographer, who uses the online name "Luna" to protect her privacy, has been quietly posting her haunting, evocative images in the Flickr photo sharing website for the last two years. With oddly vibrant colors, they show entrancing and disorienting scenes of overlapping images which trap one's eye in layers of meaning. 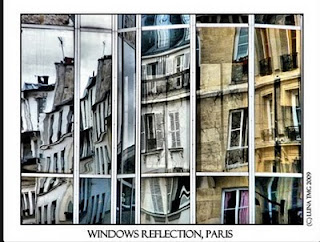 Like most people with autism, Luna has several fixations -- topics which intensely fascinate her and dominate her thoughts. For Luna, these include cats, reflections, and vegan cooking. All three show up in her photographs, but her most moving images involve the reflections she finds everywhere. She explains that, for her,


"When I'm shooting, I often see the reflection before the thing which made the reflection. The object is not as important as the reflections. What I can see in a puddle is so moving for my soul, I'm melting with happiness!" 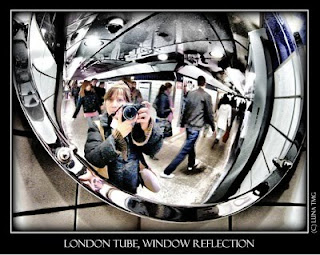 Many of her images seem like photo-montages created by combining several other photographs using photo-editing software, but they are not. All of Luna's photographs are actual scenes she has found.

Luna began creating her intriguing, jewel-like images about two years ago with encouragement from an online French autism support group she joined in 2007. In 2009, the group hosted a small gallery showing of Luna's photographs in the city of Brest. She had a second show last year, as part of France's National Autism Awareness Week, and there will be a third show in April, 2011. The group has also self-published a book of Luna's work -- which sold out within two days. A second printing is underway. 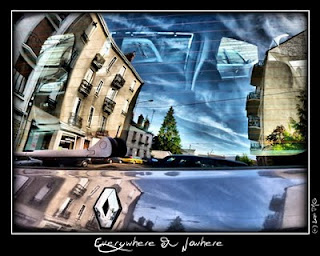 Professional photographer Courtney Bent is astonished by the power of Luna's photos. Bent is nationally known for her work putting cameras in the hands of people with significant physical and cognitive disabilities, helping them share their unique visions of the world. Bent's documentary about this work, "Shooting Beauty", has won numerous awards and she has been featured on NBC News and NPR, and in the Boston Herald. She also teaches photography at the college level and does commercial photography. As one might expect, people often approach Bent and ask her to look at a new "amazing" photograph by someone with a disability. Frequently, the work is only mildly interesting. But Luna's work was different: "I wasn't expecting it to make me go "WOW!" It's rare when I see something that is (this) unique and different."

What impresses Bent most is Luna's use of colors.

"She really is a master over her color technique," says Bent, "There is a feeling in her images that there's always a storm brewing. But she manages to find the quiet moment within the storm."

Bent says Luna achieves this calm-before-the-storm effect by stripping out the color in places at the edges of her images while enhancing the interior colors. Her color choices intrigue Bent: "Luna manages to create a warm, neon tone in her images, which seems to be a contradiction of colors. She is able to weave warm tones of yellow and brown with vibrant neon greens and blues to create an inviting, unique color palette."

"She has this amazing ability to create this quiet moment in chaos. It is almost like the chaos is peaceful to her. I'd be curious to find out how she literally views world. It's possible that the outside world appears to be really, really chaotic, and the snap of her camera allows her to create one still moment within the chaos, where the world…. stops… and is finally not moving anymore."
Bent is also impressed that Luna's reflection images have multiple layers or planes of images. "Each little portion is an image within itself. So you are allowed to settle peacefully on each little section, and each little section seems to have its own little story." 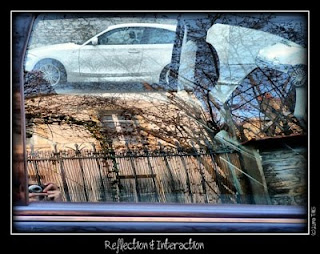 For example, in the image Reflections and Interactions, (a photo of reflections in the passenger window of a parked car) Bent says your eye begins looking through the car window as the "top" or surface layer of the image, then your eye "travels" beyond the car to the scene reflected in the window. "And now we are walking up to the fence. And then we go from the fence over to the side and it looks like "Hmmm, is this another building?" And we're out in the woods now. We've got the trees up above. And now the sky, and I get to go up into the sky." Bent finds this layering of places within the image to be deeply engaging.

Despite the sophistication of her photographs, Luna is largely self-taught. She attended three years of art school several years ago and learned some basic photography skills. "We had a photography teacher" she says, "But he wasn't impressed by my work (at this time I was obsessed by macro). I was just an average student for him. You should have seen the poor pics I produced." A few years ago, as she explored vegan cooking, she began taking photographs of her creations and posting them to her online autism group.

A member of the group, Sue M. (parent of a child with autism), remembers being stunned by these photos. Usually, Sue says, vegan food does not look very appealing, "You have to be clever to make it look good. But with these, I could practically smell and taste them." 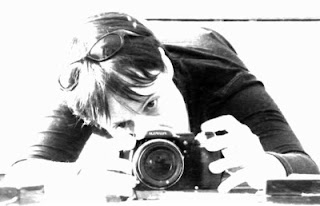 In 2009, Luna attended an Asperger event in Paris with Sue and several other members of the online group. Luna brought along a camera and took photos, but, Sue remembers, "She didn't want a photo of any of us, just the reflections." In a restaurant afterward, Luna also took a photo of Sue's dessert, making it look much more appealing in the photo that it looked in real life. "It was amazing," Sue says.

After Luna posted the photos to the online autism group, members encouraged her to do more. Soon after, she began posting to Flickr and the group hosted her first public showing as part of a fund-raising event in Brest, France. All the prints sold that day.

Luna has trouble explaining how she achieves her effects. "People watching my pictures are amazed by the colors of my images, the fact that common things, through my camera and my eyes, are made "beautiful". Well, my secret is… I don't know! LOL." Luna uses simple, free photo-editing software which she finds online ("Photoshop seems too hard for my brain"). Then, "I switch buttons, I play with my mouse, until I'm pleased with the result and I feel well watching my pic." 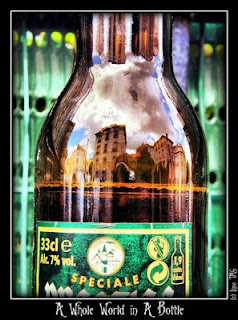 For Luna, her favorite photo is "A Whole World In A Bottle" -- an image of a street scene reflected in a beer bottle, with Luna's trademark haunting colors. This image is important to Luna because, she says, "It represents what I'm living."


"Do you know what it’s like living in a painful glass ball? Behind a window, all the time, being aware of this invisible wall that (separates) you from the others, even when you are surrounded with other people or even with your own family?"

Although Luna has Asperger's syndrome and is relatively high functioning, she has significant cognitive issues. "I have some troubles with space and time, and it’s difficult for me sometimes to understand where noises come from. I can go home after my work and I often don’t recognize my own flat. It’s more dramatic when I go away for the whole weekend: I need several minutes to re-appropriate my apartment, otherwise I begin to panic.” 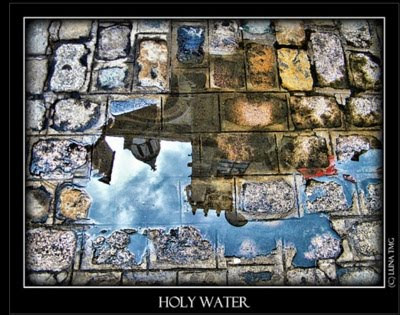 "I see the world through little details. I must add each of these details, one after the other, to have a general view of things. I don’t really recognize myself in a mirror. I’m a "puzzle-woman", like I was made of different pieces. I mean, it’s like I was a living camera without a body, or just a head and nothing else under. I can see my hand writing on the keyboard but it could be somebody else’s body parts. Strange, hey?"

And yet, in all this confusion, Luna finds delight in things most people overlook: "As you can see, I'm hypnotized by reflections. It's the kind of thing that brings so much excitement and joy to me. [In my photos] I wish to put two worlds in one, at the same plane, in a wonderful encounter. These two worlds together are amazingly beautiful. I am speaking about the neurotypical world and the autistic world (the way I am living it, I mean). I think this answer is someway close to the truth." 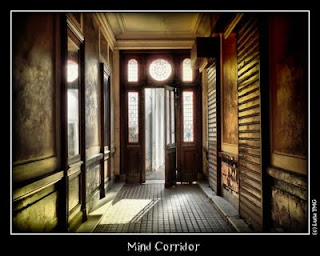 Bent also finds powerful messages in some of Luna's non-reflection photographs, such as Mind Corridor, a photograph of an empty hallway in an old building. "Even in her barren spaces, there's this beautiful warmth through the luminous quality of light in the room. It's once again this sort of… empty, but enlightening, beautiful look into a quiet space. The image has a lonely quality because of its sparseness, but it's also a place that you want to continue to look at and be in. In this particular image, she's pulled the color out of the world beyond the door which evokes a feeling that you're moving in and out of time. She creates a space that allows you to seamlessly flows from past to present." 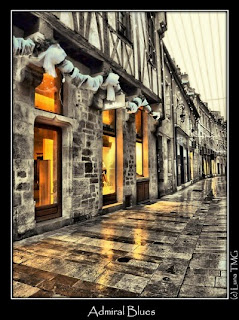 In the meantime, Luna continues to roam the streets and towns of France, "Drowning in happiness" at the reflections she finds, and sharing her remarkable visions online with the rest of us.

Some of Luna's photos will be on display at the Autism Works National Conference. They can also be viewed on Flickr at www.flickr.com/photos/lunatmg

Courtney Bent can be contacted www.bentphoto.com

The Autism Works national conference is presented by the Disability Policy and Studies office of the University of Missouri's School of Health Professions, and by Integrated Behavioral Systems. Details on the Autism Works conference are available at: www.facebook.com/pages/Autism-Works/136057253090452 or at dps.missouri.edu/Autism.html.